The Prince Edward Island Museum and Heritage Foundation, together with the Natural History Society of Prince Edward Island, is developing an inventory of science specimens collected on PEI. Since there has never been a natural science museum on the Island, natural science specimens collected in PEI are spread geographically across institutions throughout Canada and the United States. A survey of existing Prince Edward Island science specimens was undertaken in the fall of 1982, but now 30 years later, we wish to update this inventory and make our report widely available to the scientific community and the public. This project is an initial step in the possible development of a Provincial Natural History Museum. Are there natural history specimens (mounted birds, mammals, insects, butterflies, shells, fossils and rocks), including paleontological finds from Prince Edward Island present in your collection? And if you are not sure what the specimen or species is, we can try to help you identify it or take pictures and send it off to experts in the field. The goal is to gather information, not specimens, but we are happy to receive specimens if you or others like to discard a natural history specimen collection.  We would greatly appreciate any data on PEI specimens you have.

So far P.E.I. specimens are found in all corners of the continent! Vascular plants are found at the Rocky Mountain Herbarium, University of Wyoming and small mammals at the Museum of Southwestern Biology in Albuquerque New Mexico! Did you know that the New Brunswick Museum in St. John has more than 10.000 P.E.I. specimens from tiny little insects to whales in their collection and that the E.C Smith Herbarium at Acadia University in Wolfville has over 4000 P.E.I. botany specimens, including plants collected by J.S Erskine subsequent to his 1951 flora inventory?

Here are a few more exciting finds:   Are Little Brown Bats on the brink of extinction? White-nose syndrome has decimated bat populations in North America. Four Myotic lucifugus, Little Brown Bats were found at the same locality in Cavendish and collected by J. Sherman Bleakney on June 19, 1958.  The specimens are stored at the Wildlife Museum at Acadia University, Wolfville, Nova Scotia. In the 1983 inventory report on natural science specimens it was indicated that there were 29 little brown bats collected at Green Cables House. It is unknown where the other 25 bats went. There were also 11 little brown bats found in Queens County, at the Northeastern University in Boston.

These specimens serve as an important source of information over time. 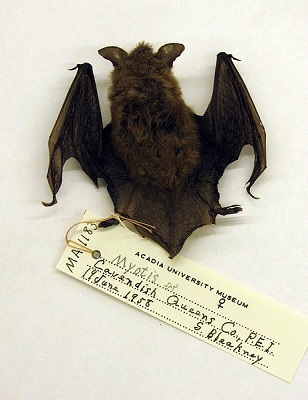 The New Brunswick Museum has 24 avian records. In the collection is Anser brachyrhynchus; this Pink-footed Goose has the status of being an accidental, and non-breeding species on the Island. It was collected in Mayfield, north of New Glasgow on December 2, 2010.

Marine specimens that have stranded on the Island are processed by the Canadian Cooperative Wildlife Health Centre (at the Atlantic Veterinary College). Some are on display at the college, others are stored and on display at the New Brunswick Museum. In 2013, a White-beaked Dolphin, Lagenorhynchus albirostris was found the North shore in 2013, but a rarer whale, a Sowerby’s Beaked Whale, Mesoplodon bidens stranded at McNeil Brook, NE of Cavendish on June 5, 2013. The Sowerby’s beaked whale is a whale that is rarely sighted. No population estimates have been made and as of 1991, there are about 90 records of the species. The majority of the records are from around the British Isles. Interestingly, these whales only have two teeth.

But...the most exciting find of all is “Leidy”. Bathygnathus borealis (Leidy), this unique fossil of a dimetrodon or sail-backed reptile (a scaly carnivorous reptile that could grow 3 meters in length) was found in 1845 in French River, PEI. It was examined by Joseph Leidy and donated to the Academy of Natural Sciences of Philadelphia, Drexel University, Philadelphia, Mass in 1854. Dimetrodon prospered during the middle Permian period, between 280 and 265 million years ago. The first dinosaurs, according to the current state of our knowledge, evolved in South America during the middle Triassic period, about 50 million years later.  A copy of the fossil is stored at the UPEI Biology Museum.

So far, our research shows that about 30 museums and institutions in Canada and 20 in the United States have Prince Edward Island Specimens!

The list goes on and there is more to come.....stay tuned!

A Great Gray Owl was found dead on the roadside on Oct. 29, 1991 and reported by Norna Gard to Lorne MacDougall.  It was found near Bloomfield on the Mill River East road - Rt. 145.  Ross Bernard, conservation officer in the area confirmed that the owl was indeed a Great Gray Owl, which is considered an accidental or rare find in the province and there have only been a few unconfirmed sightings. An article in the Island Naturalist (Issue # 120, January - February 1992) by Rosemary Curley tells the story of the "First Record of a Great Gray Owl."

Earle Kennedy was an amateur fossil/mineral collector who donated a large collection consisting of almost 190 rocks and fossils that were collected at Miminegash, Victoria beach, and Hillsborough Bay. Earle Kennedy was a colonel and Second World War veteran, clerk in the legislation and author. The collection was catalogued at the Museum and Heritage Foundation artifactory in 1985.

For the inventory report we look for native Prince Edward Island specimens, but it is possible to find non-native species that make the province their home. Increased global travel and trade has expanded the range of certain species. An example of this is the Corpse Snail Arianta arbustoru. It seems to expand its well-established presence in eastern Canada. The first occurrence of this non-native and alleged potential pest on Prince Edward Island was reported on 2 July 2013, when 2 specimens of Copse Snail were collected about 33 m apart along the grassy edge of the Confederation Trail in Summerside. It is important to document information about current or anticipated distributions of non-native species to set priorities for the control of any potential pest. The specimens are preserved at the New Brunswick Museum in Saint John, NB. More information can be found in an article published in January 2014: Occurrence of the Copse Snail, Arianta arbustorum (Helicidae), on Prince Edward Island: 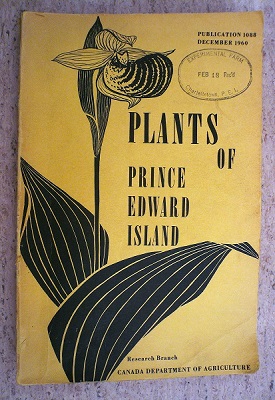 The Nova Scotia Museum of Natural History botany collection in Halifax contains more than 60,000 specimens. These include a herbarium of 20,000 sheets of vascular plants. Significant collectors include the Erskines (John and his son David). The herbarium contains over 1300 Prince Edward Island specimens.

The Atlantic Canada Conservation Data Centre in Sackville, NB has a rare P.E.I. butterfly in its collection. Early Hairstreak Erora laeta, is ranked SRank S1, indicating that it is extremely rare in Prince Edward Island and it is vulnerable to extirpation (typically 5 or fewer occurrences or very few remaining individuals). This early Hairstreak is the only record for the Island. The Early Hairstreak that was collected in P.E.I. is not in particularly good condition as you can see from the picture. The specimen will eventually be moved to the New Brunswick Museum in Saint John.

This is what the butterfly in the image above, would look like when seen in the wild.