At the start of the 1870s, the Island was a thriving and independent British colony, made prosperous and even a little bit overconfident by the shipbuilding boom. By 1873, it had to throw itself on the mercy of the federal government to offload over $3 million dollars worth of debt. What happened in between was the building of the PEI Railway.

In 1871, the Hon. J.C. Pope passed legislation for the building of a railroad that would run the entire length of the Island as a measure designed to improve the colony's poor system of overland transportation.

A vote in the legislature came down to a final tiebreaker, and when legislative assembly representative Donald Cameron voted for construction, the die was cast. The Railway Bill was passed

Before the end of the year, the contract for the construction of the railway was awarded to Schreiber and Burpee, and on October 5, Mrs. W. F. C. Robinson, the wife of the Lieutenant Governor, turned the first sod. Soon, the roadbeds, narrow gauge tracks, and train stations for the new line began springing up all across the Island. 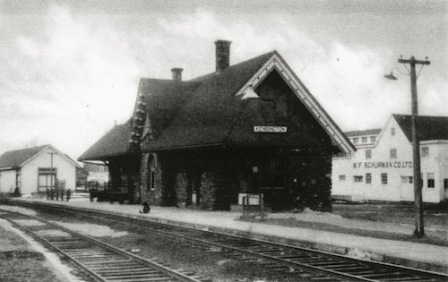 It is no exaggeration to say that without the railway there would be no town of Kensington at all, at least not in the way we know it today. In the 1860s, most businesses shipped goods via water route. As a landlocked community, Kensington was cut off from the prosperity that came from seagoing trade and the thriving shipbuilding industry. The commercial centres in the region were those with good ocean frontage, such as Margate, Malpeque and Cascumpec.

Kensington, in comparison, was a bit of a one-horse town. The main reason for the first settlement in Kensington was that the place represented the convergence of five main roads. But its first name, Five Lanes End, could also have served as a description of what was located there ... the end of five bridle paths, surrounded by woods. 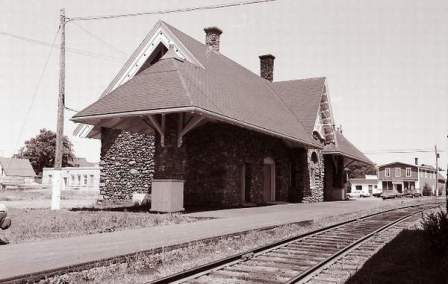 When settlers began arriving between 1820 and 1840, they built public houses and liveries to serve travellers on the Old Post Road. But there was still little reason for the re-named village of Barrett's Cross to expand beyond these humble beginnings. The roads that met in the village were of very poor quality, and most people travelling from Summerside to Charlottetown chose to go by boat, rather than submitting themselves to the dust and slowness of land travel.

In 1862, the name of the town was changed to the more regal-sounding Kensington, after the birthplace of Queen Victoria, but its fortunes stayed much the same. The reasons were simple: no access to the water, no access to trade. 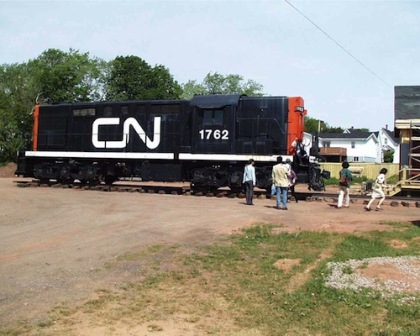 When the railway route through the district was finally announced, it completely bypassed Margate and went through Kensington instead, the little place where a cart could barely pass. With this one decision, the fortunes of the two towns were instantly reversed: now Kensington was destined to become the commercial centre for the district, and the once-prosperous Margate would almost certainly decline in importance.

But by 1875, the passing of the rails through Kensington was a done deal, and area residents could do little else but accept the consequences. In Margate, the business community realized that if they wanted to remain successful, there was nothing they could do but follow the rail lines and move to Kensington. 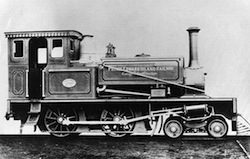 Businesses clustered around the town's train station, the final version of which is a beautiful stone structure completed in 1905. This influx of people and money quickly made a boomtown out of Kensington, and left the once-thriving Margate as a ghost of its former self. Thanks to the railway, and a few back-room deals in Kensington's favor, Margate is now famous for its beautiful rolling hills, not its business district. Kensington, once a bustling railway hub, is now a heritage destination, with its station still at the core of the community. 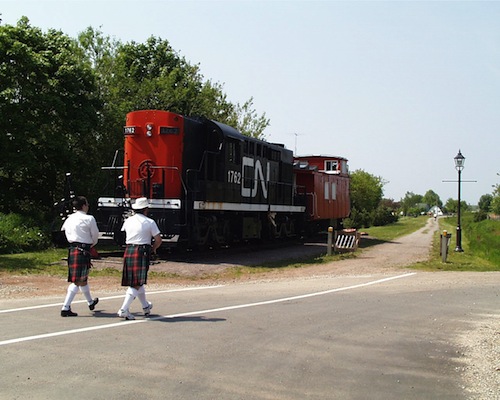 End of an Era

Years after the Age of Steam was replaced by the Age of Diesel, the tracks were becoming travelled less and less frequently on Prince Edward Island. On December 31, 1989, the last part of the Island's railway was abandoned by CN Rail. Slowly but surely, the once-proud rail system began to be ripped up and sold for scrap. However, the extensive system of rail beds was built to last, and plans have been assembled to put it to good use. The abandoned rail lines  have been converted into a section of the nation-wide Confederation Trail, a network of hiking, biking, and snowmobiling trails that stretch from coast to coast. Today, the former railway line between Kensington and Summerside not only promotes the health and well being of the community, but also represents one part of an important project for knitting the country together, as the railway did for so long.

With rail service on PEI a thing of the past and our train tracks being removed, Summerside resident Lowell Huestis knew that mementos of the Island's railway were disappearing fast. Aided by the Summerside Chamber of Commerce, Huestis arranged to have Engine 1762 moved from the Summerside railyards to a location close to his home. There, Huestis painted the engine black, covering its orange, black and white Canadian National Railway (CN) colours. Shortly after, Huestis contacted the Kensington Area Chamber of Commerce about giving the engine a permanent home here at Kensington Station.

The move was a complex one that involved the combined efforts of Albert Waugh & Sons Construction, the expertise of retired CN worker Art Lambe and17 volunteers, as well as intensive planning.

A payloader was used to push the 125-ton engine along the remaining tracks as far as New Annan where the rails had already been taken up. There, the road was temporarily closed, and a large group of onlookers gathered to watch the spectacle of Engine 1762 crossing the pavement. Approach rails were situated and a portable track put in place joining the sections of track. The crowd watched with tense anticipation as the massive engine was moved across the road without incident.

At about 4:00 on that November day, Engine 1762 reached its destination at Kensington Station where it was greeted by a cheering crowd. Today, the station building and stately Engine 1762 serve as permanent reminders of the railway that once united our country, and of Kensington's legacy as the town that was built by the coming of the railroad.

Reference: Visit the Kennet Railway website - Please note that the credits section of this site includes a bibliography listing as well as book titles that may be of interest to anyone researching the railway on PEI.